Yesterday was windy, today was very windy, and on a small island with some beautiful coastal roads that need exploring it can make for very difficult if not dangerous exploring.

Checking the weather local forecast we were informed that the 60kmph winds would die down in the early afternoon. We decided that, along with Si from Velo Club Ibiza, we would get cracking at around 9.30 in the morning, only suffering a few hours of the harsh wind!

The first km of the route lead us out to salines, a huge salt farm on a peninsular of the island towards the south. Running a salt farm involves lots and lots of very large, flat inlets which capture sea water and then dry in the sun for the salt to be removed and stored…great, apart from the prevailing winds which we faced head on put us at a crawling pace and constantly being buffered all over the road, luckily there was very little traffic to worry about. No photos here I’m afraid as I was too busy stopping my bike blowing away. If people think riding in wind is easy, think again. I was using a heart rate monitor today at on the flat at 20kmp I was pushing out 155bpm…typically higher than I would when climbing!!

We were then lead in land to escape the wind and then lead straight off a perfectly good but of Tarmac and straight onto a ‘camino’ or rough road as the locals call them. This wound around the foot of a the highest peak in Ibiza and then finally shot skywards!

We were a little hesitant to start on this road due to very skinny 23mm tyres, however, the bikes were amazing and never struggled for grip anywhere on the climb, providing you were seated. This camino lead us to just under 500m and some stunning views.

From up here we could see the whole island, all the hills, coves, beaches, roads and towns, stunning!

The descent back down wasn’t as bad as we had imagine, sure, being on my Santa Cruz Nomad would have been way more fun and we spotted some trails diving of to the sides, but that wasn’t the point.

Once back on Tarmac we had another 50km of twisty, undulating, empty but blustery roads to go before our lunch stop rendez vous with Stefan from the Rapha Continental team!

It was great to meet him and over some osso bucco, ensalada pollo and cerveza we discussed trips, bikes, mountains, travel and ideas!

The wind finally died down so the final 30km home flew by! 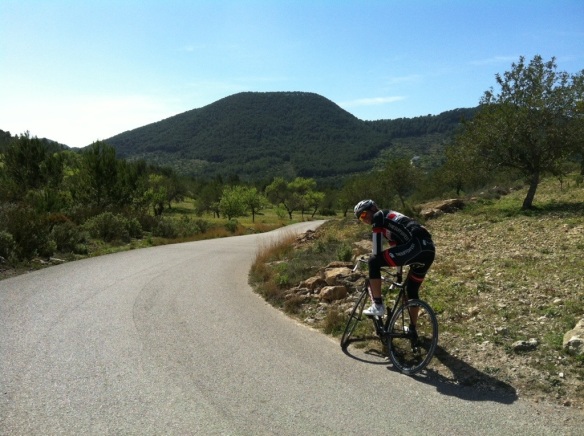 We arrived home, feeling beaten by the wind but satisfied after a tough day in the saddle, with 125km and 2000m climbing!

A beer on the harbor side was very much needed after that. 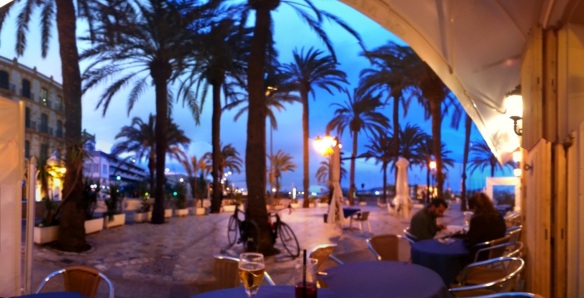